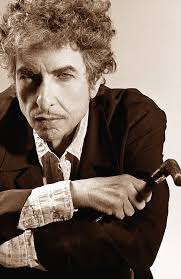 Cinderella, she seems so easy
“It takes one to know one,” she smiles
And puts her hands in her back pockets
Bette Davis style
And in comes Romeo, he's moaning
“You Belong to Me I Believe”
And someone says," You're in the wrong place, my friend
You better leave"
And the only sound that's left
After the ambulances go
Is Cinderella sweeping up
On Desolation Row

Now the moon is almost hidden
The stars are beginning to hide
The fortunetelling lady
Has even taken all her things inside
All except for Cain and Abel
And the hunchback of Notre Dame
Everybody is making love
Or else expecting rain
And the Good Samaritan, he's dressing
He's getting ready for the show
He's going to the carnival tonight
On Desolation Row

Now Ophelia, she's 'neath the window
For her I feel so afraid
On her twenty-second birthday
She already is an old maid
To her, death is quite romantic
She wears an iron vest
Her profession's her religion
Her sin is her lifelessness
And though her eyes are fixed upon
Noah's great rainbow
She spends her time peeking
Into Desolation Row

Einstein, disguised as Robin Hood
With his memories in a trunk
Passed this way an hour ago
With his friend, a jealous monk
He looked so immaculately frightful
As he bummed a cigarette
Then he went off sniffing drainpipes
And reciting the alphabet
Now you would not think to look at him
But he was famous long ago
For playing the electric violin
On Desolation Row

Dr. Filth, he keeps his world
Inside of a leather cup
But all his sexless patients
They're trying to blow it up
Now his nurse, some local loser
She's in charge of the cyanide hole
And she also keeps the cards that read
“Have Mercy on His Soul”
They all play on penny whistles
You can hear them blow
If you lean your head out far enough
From Desolation Row

Praise be to Nero's Neptune
The Titanic sails at dawn
And everybody's shouting
“Which Side Are You On?”
And Ezra Pound and T. S. Eliot
Fighting in the captain's tower
While calypso singers laugh at them
And fishermen hold flowers
Between the windows of the sea
Where lovely mermaids flow
And nobody has to think too much
About Desolation Row

Yes, I received your letter yesterday
(About the time the door knob broke)
When you asked how I was doing
Was that some kind of joke?
All these people that you mention
Yes, I know them, they're quite lame
I had to rearrange their faces
And give them all another name
Right now I can't read too good
Don't send me no more letters no
Not unless you mail them
From Desolation Row